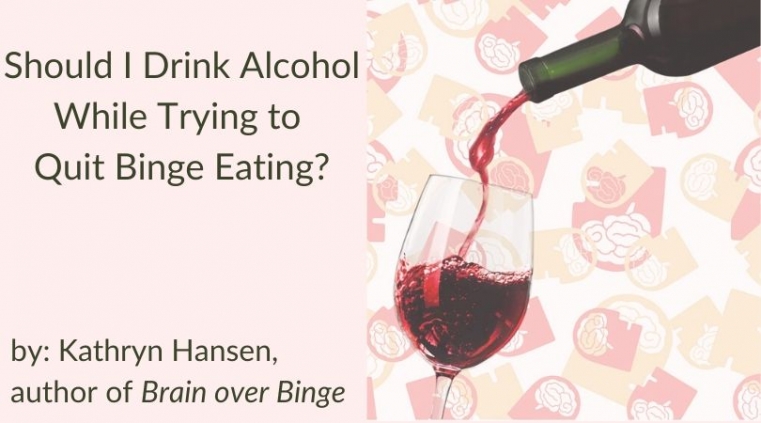 When I struggled with binge eating, it seemed like alcohol often ruined my progress in recovery. I’d have days when I felt like I was doing pretty well—my eating was relatively normal and I felt like maybe I would make it through the day without a binge. Then, I’d get invited out to have drinks, and it seemed like my desire for recovery faded, so that by the time I got home, I didn’t hesitate to follow my urge to binge.

To avoid acting on the urge to binge, you have to use your prefrontal cortex—the part of your brain responsible for self-control and rational decision-making. The problem is: Alcohol directly affects the prefrontal cortex and reduces your ability to make sound decisions.

Does This Mean Everyone Trying to Quit Binge Eating Should Abstain From Alcohol?

Not necessarily, but I think it’s an important decision that each person in recovery from bulimia or binge eating disorder needs to make. I hope some information in this post will help you decide how you want to handle alcohol as you are breaking the binge eating habit, and you can also listen to my podcast episode on this same topic of alcohol and binge eating.

I want to first share my personal story of alcohol use during binge eating recovery, and then give you some advice to help you decide what is right for you.

When alcohol seemed to interfere with my progress, I had not yet discovered the brain-based information that I shared in my books. I still had the mindset that I was diseased or powerless over my desire to binge, and that I needed to solve my underlying emotional issues and learn to cope with problems more effectively before I could say no to binges each and every time. That doesn’t mean I didn’t try to resist urges to binge, but it usually felt like a losing battle, and that was especially the case when I drank alcohol.

At the time, the things I thought I needed to do to avoid a binge—like journaling about my feelings, or engaging in healthy self care, or reducing my anxiety, or trying to get my emotional needs met —- just didn’t feel doable when I was drinking. I simply didn’t have the mental capacity to engage with any of those activities, which rarely helped me avoid a binge anyway. Under the influence of alcohol, I was much more likely to say screw it, and go right into the harmful binge eating behavior without even trying to avoid it.

Once I changed my approach to recovery, and realized I had the power to stop acting on my urges regardless of my mental or emotional state, then avoiding binges while drinking suddenly became possible. (If you are new here and want to learn about the Brain over Binge approach, you can download my free PDF, the Brain over Binge Basics.) Because of this new and empowering mindset, I felt confident that I wouldn’t binge, even after drinking.

However, I was not a frequent or heavy drinker. At the time I recovered in 2005, I was only having one or two beers or glasses of wine a couple times per month. Since it only took a few months for my binge urges to decrease significantly, this only gave me about six times to experience the effects of alcohol on my binge urges and my ability to avoid acting on them. So, I do not have significant personal experience with the combination of alcohol and binge urges when using this brain-based approach; but looking back, I do not remember it being any harder to avoid binges when I was drinking.

I believe this was due to the simplicity of my new approach to recovery. I no longer felt like I needed to deal with my emotional issues, or stress level, or problems to avoid a binge.  I only needed to see the binge urges for what they were — automatic, faulty messages from my lower brain that no longer meant anything to me — and then just move on with my life. I had the mental capacity to do this even when under the influence of alcohol. I saw those binge-promoting thoughts in the same way that I saw other outrageous thoughts that popped up when I was drinking. Alcohol only reduces self-control functioning in the brain, it does not eliminate self-control completely. I knew there were many things I could trust myself not to do even while drinking, and binge eating became one of those things.

How Does Alcohol Affect Your Ability to Avoid Binges?

In talking to others who have more experience with alcohol while trying to stop bulimia or binge eating disorder, I’ve found that alcohol can cloud thinking and reduce self-control so much that the binge urges feel very compelling. This only makes sense due to the way alcohol inhibits the prefrontal cortex, which I also call the higher brain.

With each drink, the prefrontal cortex is impaired a little more until you feel like you have little control over your voluntary actions. This can make you more likely to act in habitual and survival-oriented ways. Since binge eating is a habit and a survival response, this means that alcohol primes you to use the neural pathways in the lower brain that drive the binge eating habit, instead of the newly developing pathways in the higher brain that are working on recovery.

You may also feel less motivated toward recovery when you are drinking.  This is because the prefrontal cortex also gives you your identity and allows you to think about long term goals and plans. When this more sophisticated part of the brain isn’t at full strength, you tend to act in ways that are out of character, and you tend to focus more on immediate gratification, and you temporarily don’t care about the consequences of your behaviors. You put what you truly want (recovery) aside and fall into a screw it mindset when you are being driven by the more primitive part of your brain.

Furthermore, alcohol strengthens those primitive parts of the brain that drive habitual behaviors.  In other words, it has the opposite effect on the lower brain and the higher brain.  Drinking causes a release in dopamine, which arouses pleasure and reward circuitry in the lower brain. It basically makes you more pleasure-seeking, and since the lower brain senses that binge eating is a form of pleasure, this could mean an increase in your urges to binge. However, this is not the case for everyone who struggles with bulimia or binge eating disorder. You may find that alcohol and the feelings it gives you are pleasurable on their own, without triggering a desire for the temporary and harmful pleasure of a binge (which always results in pain).

How Should You Deal with Alcohol as You Recover from Binge Eating?

Even if you know you have power over your urges, even if you understand that you don’t have to act on them (listen to Episode 4 for more on how to stop acting on urges to binge), drinking may tip the balance in favor of your lower brain so much that you find yourself binge eating. In the moment, you may feel like you don’t even care about recovery, and you may believe the thoughts that say, just one last time, and you can quit tomorrow. Drinking may even take away the sting of regret you usually feel right after the binge; but, when you wake up the next day, your rational brain will return and you’ll remember your desire for recovery and wish you had not binged.

On the other hand, you may be someone who can avoid the I don’t care mindset that sometimes gets drunk people to do things they regret. This could be due to a difference in personality types or a difference in the way alcohol affects each person physiologically. You may be someone who feels confident in your ability to say no to binge urges, no matter how many drinks you have.  Or, you may be somewhere in between, and find that you only feel in control up to a certain point. After 2 drinks, you might feel like you can easily avoid the harmful lower-brain-driven behaviors, but after 4 drinks, a binge starts to seems much more compelling.

Even though I personally felt like I could avoid a binge even if I was drinking, I didn’t put it to the test with larger amounts of alcohol. Not drinking a lot wasn’t something I resolved to do to help recovery —- I just wasn’t into drinking very much at the time. There were previous times, in college, when I did have more than a couple drinks, and can’t say for sure whether the new brain-based perspective that eventually helped me recover would have prevented binges during those times or not. I’d like to think that binge eating was so off limits in my mind that I still would have been able to say no, just like I always said no to driving after drinking.

I encourage you to think about the experiences you’ve had with alcohol and binge eating, and decide on a plan that works for you. Think about the way alcohol makes you feel in relation to your urges to binge, and your motivation toward recovery. Considering how alcohol affects the brain, it’s best to proceed with caution when you drink. You may even decide to give up alcohol completely until you’ve significantly weakened the binge eating habit or ended it altogether. Alternately, you may decide to simply limit your alcohol intake until you feel much more confident in your recovery. You can always make changes over time as you make progress in stopping the binge eating habit.

*This post is for recovering binge eaters whose drinking is already within reasonable limits. This post is not for people who feel like they have a problem with alcohol. If your drinking feels out of control, please seek appropriate help.

For more help with ending binge eating, you can download the free Brain over Binge Basics PDF, or learn more about my Course.