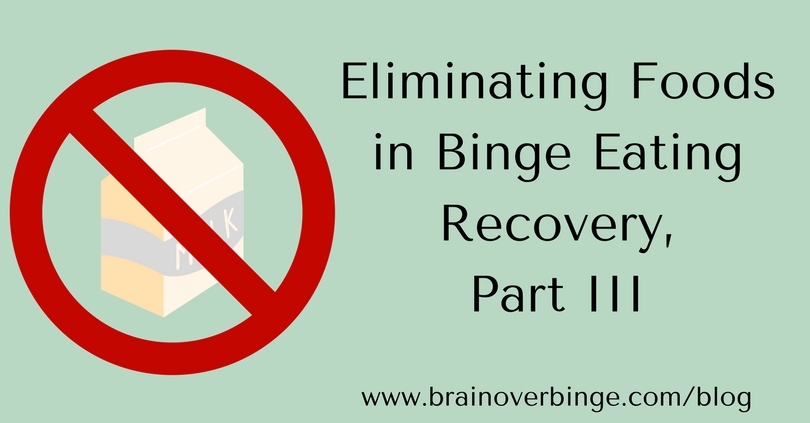 I’ve been talking about eliminating foods for those who need to, and for those want to lead a healthier lifestyle (see Eliminating Foods Part I and Part II).  In this post, I’ll discuss the importance of ditching diets, and replacing foods you are trying to eliminate with nourishing and enjoyable options. I’ll also share information and insights with from a helpful book called Ditching Diets by Gillian Riley, which will help you understand how you can avoid letting healthy changes turn into restriction or deprivation. But first, I’m going to talk briefly about my own experience with needing to eliminate foods—which is something I addressed in Brain over Binge—and I hope it helps you see how it’s possible to give up certain foods without dieting.

An Example of Giving Up Foods and Giving Up Dieting

Since I recovered in 2005, I’ve gone through 4 extended periods of time that I’ve had to completely eliminate certain foods. My first child developed allergic colitis only several weeks after birth (which is a condition where the baby’s immune system overreacts to food proteins in the mother’s milk, which leads to irritation/inflammation, ulcerations, and even some bleeding in the colon). To treat this, I had to give up all dairy, beef, wheat, soy, eggs, and nuts for several months. When I had my second child, I hoped it wouldn’t happen again; but sure enough, when my daughter was a few weeks old she began developing the same symptoms. This time, I knew exactly what to do to help her, so I eliminated the foods again; and within a couple weeks, her symptoms disappeared. For my 3rd and 4th babies, I tried to prevent the issue by giving up all dairy—which was seemingly the biggest culprit—one month prior giving birth. My 3rd child did fine, but with my 4th (who is 8 months old at the time I’m writing this), there was about a 6-week period when I had to eat nothing but potatoes, turkey, chicken, olive oil, almonds, and some mild vegetables and fruits (and vitamins) in order to clear up his digestive tract. All my children are okay now. This was a temporary protein sensitivity in infancy, not a true food allergy or ongoing digestive condition.

Changing my eating in this way and giving up foods to help my babies didn’t cause any problem for me.  It never felt like a “diet,” or like I was depriving myself. There were certainly times that I wished I could eat the foods I was eliminating, and I did feel a little sorry for myself sometimes as I watched the rest of my family munch down a pizza, for example, and I was eating my 3rd meal of sweet potatoes and chicken for the day. Although it was inconvenient to have a lack of freedom around food, and it’s not something I’d want to continue for a long period of time; it wasn’t a bad experience at all. There was always a choice to put my babies on hypoallergenic formula, but that would have been costly and not as healthy for them. I chose to change my diet, and I felt like I was doing the right thing for them.

In the same way, people who lead healthy lifestyles and nourish their bodies well with real food don’t feel “deprived” when they eliminate certain foods. They know they are doing right for their bodies, and they feel good doing it; and in all likelihood, they would actually feel deprived if they were forced to eat a diet consisting of a lot of processed, low-quality, low-nutrient food. Wanting to nourish yourself well, and therefore avoiding foods that have no benefit to you, is much different than trying to force yourself to follow a bunch of food rules and starving yourself just so that you can lose weight.

Ditching Diets, and Letting Go of Restriction While Eliminating Foods

It is possible to make healthy changes, or even eliminate a certain food completely because it creates an adverse reaction, without it turning into a rigid diet—and sometimes the difference is simply in your mindset. I recently came across a book that does a wonderful job of explaining why there is no need to think in terms of rules, restrictions, and prohibitions when it comes to taking on a healthier lifestyle. It’s called Ditching Diets, by Gillian Riley. I’ve had a few of my own readers tell me that this book is helpful to read along with Brain over Binge, especially if a healthy lifestyle is desired. Ditching Diets discusses some of the same concepts that my book does, but with a greater focus on helping you let go of the dieting mindset, and addressing addictive overeating—that gray area that doesn’t feel like a binge, but also does not feel like the way you want to be eating.

[Update: I’ve interviewed the author of Ditching Diets on my podcast: Episode 64:  Stop Yo-Yo Dieting and Take Control of Overeating (Video Interview with Gillian Riley), and she has also written a guest blog post: Fasting & Binge Eating: Not So Fast (Post from Gillian Riley)

What I liked best about Ditching Diets was how Gillian drove home the idea that we all have free choice about what and how we eat, and everyone is capable of achieving freedom and peace with food—without solving emotional problems first. But, she also makes it clear that having freedom with food doesn’t mean we’ll just be eating a bunch of junk all the time because we are “free” to do so. In fact, it’s quite the opposite—once we feel our free choice and give up dieting, we will be more likely to make better and healthier choices.

I could relate to so much of what this book talked about, because I’ve experienced it. When I was dieting, I indeed felt deprived when I created a lot of food rules and avoided certain “fattening” foods. My restriction led me to eat much more of the foods I was trying to avoid and led me down the path of binge eating. However, now, I don’t have the same reaction when I choose to avoid an unhealthy food, or when I gave up so many foods while breastfeeding. Without the dieting mindset, passing up a certain type of food doesn’t make me feel like I’m missing out on something great, and doesn’t create powerful cravings. (For more about letting go of the dieting mindset, listen to Episode 48: How Do I Let Go of the Dieting Mentality in Binge Eating Recovery?)

As you may know from my books and other blog posts, I’m far from being a “perfect” eater. Perfect eating doesn’t even exist because nutrition science is constantly expanding and changing. I eat unhealthy foods sometimes, but as Ditching Diets does such a good job of explaining—when there is a strong sense of free choice about how you eat, and you don’t feel out of control—choosing to eat less-than-ideal foods isn’t a problem. It’s simply a choice with certain outcomes you have to be prepared to accept. Yes, I choose convenience over nutrition when my life is busy, and I accept that when I do that, my body isn’t being optimally nourished.  I do strive to nourish my body well as much as I can, but it is a balancing act. Everyone must create their own balance, and it never has to be all or nothing. It never has to be perfection or binge. (If you struggle with perfectionism, read my blog post on accepting imperfection in your eating.)

If you are taking on a healthy lifestyle, I think it’s very important to make sure you have enjoyable and nourishing replacements for the foods you are not eating. When you give up a food, you also want to feel like you are giving yourself a food in it’s place—a food (or foods) that you actually like and look forward to eating. Sometimes people forget the “enjoyable” part, and then get trapped in the dieting and deprivation mindset. The goal should be to find foods you take pleasure in eating, and that make you feel good as well. This can take some experimenting. To illustrate this, I’m going to give one example from my own life of a food my family has been trying to eliminate, and how we’ve replaced it:

My kids love waffles (they like peanut butter and maple syrup on them, which I think is a bit odd:-)), and I slowly got into the habit of giving them processed, pre-packaged waffles too often. At the end of my 4th pregnancy and after my son was born, the older 3 kids ate the pre-packaged waffles every single day. I was so exhausted and sleep-deprived that I couldn’t find time or energy for anything better first thing in the morning, and it was the only easy breakfast that all of them liked. Around the end of 2012, my husband and I decided that we’d find a way to make healthy, homemade waffles so our kids could get a better start to their day. We experimented with some recipes and finally found something that worked—using eggs, coconut milk, coconut flour, baking soda, vanilla, cinnamon, and honey.  The waffles are delicious!  I’ve been making a big batch each week and I freeze them, so that the mornings are just as easy as when we bought the frozen waffles from the store. If you asked my kids, I’m sure they would still say they like the “waffles from the store” better, but they eat up the ones I make too. I know this is a simple example, but I want you to see that there are enjoyable, nourishing, healthier replacements for foods that you want to avoid or need to avoid.

Finally, as a reminder from my last post, try to keep making healthy changes to your eating separate from quitting binge eating. That way, if you choose to eat something like processed waffles one morning, you won’t pay any attention to any thoughts that say, “you’ve already failed, you might as well binge.”  When you realize that you can avoid binges no matter what foods you decide to eat, you set yourself up for a lifetime of complete freedom from binge eating.

To jump start your recovery from bulimia or binge eating disorder, you can download my free PDF, The Brain over Binge Basics.

If you want more help in ending the binge eating habit, and more information on issues like the one discussed here, you can learn about the Brain over Binge Course.