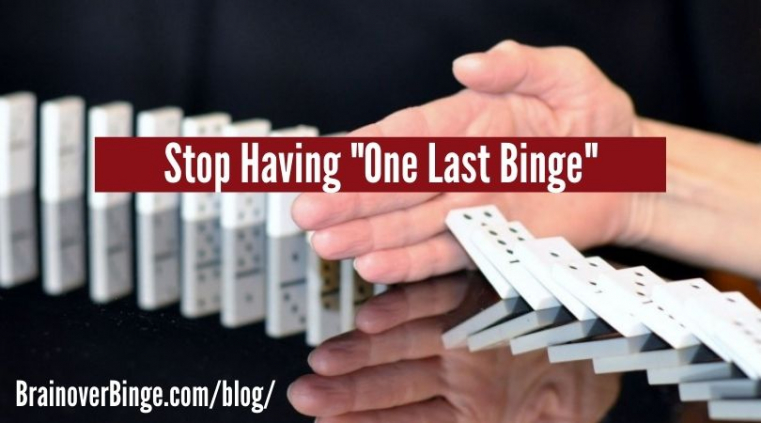 Do you tell yourself that each binge is going to be your last, only to find yourself bingeing again? You are definitely not alone in repeating this pattern, but you can learn to stop the cycle of broken promises to yourself.

Having frequent last binges can keep you putting off recovery indefinitely, and in this post, I want to help you overcome this harmful tendency. I’ve discussed one last time thoughts in Episode 14 and Episode 73 of the podcast, and here, I’ll give you some additional ideas—because this issue is a big factor that interferes with stopping binge eating for good.

First, I’ll talk about the one last time mentality more generally—to help you understand why it occurs, and then I’ll explain how you can successfully deal with this in binge eating recovery.

The One Last Time Mindset is Part of Our Nature

You are not the only one who tells yourself one last time and then doesn’t follow through. I think everyone has this tendency to some extent, even if binge eating is not involved. We tell ourselves one last episode of a tv series late at night—only to watch 2 more after that. We tell ourselves one more minute of a warm and relaxing shower—and then indulge in 5 more minutes. We hit snooze one more time in the morning—several times. We tell ourselves one more scroll through social media—only to find ourselves still scrolling 20 minutes later. We sometimes do keep our word in these situations, but most of us are guilty of not always being true to our “last time” commitments.

If you’ve tried to quit an addictive substance like cigarettes or alcohol, how many times did you tell yourself it was your last smoke or last drink before it actually was—if it ever was? Even with food, normal eaters may say one last chip or one last cookie—only to go back to the bag a few more times. They may say it’s their last fast food lunch of the week—and then find themselves pulling in the drive-thru again the next day.

This tendency is understandable considering that humans are pleasure-seeking creatures, and habitual ones as well. We all have desires to engage in behaviors that bring us enjoyment and ease. However, we are also rational beings with goals and responsibilities, and as I’ll explain, the one last time mentality is a way that we try to satisfy both parts of ourselves—the rational and the pleasure-seeking.

I’ve come to view the one last time mindset as a sort of intersection between our rational and primitive nature. It’s where our lower-brain-driven desire for instant gratification and temporary pleasure meets our higher-brain-driven desire to accomplish things and pursue deeper meaning in our lives. (For more about the lower and higher brain, listen to Episode 3).

Although it’s in our primitive nature to want to be comfortable, we know that we have other aspirations as well. Our higher goals—or even the necessary tasks like dishes or laundry—are often not pleasurable, but bring the results that we truly want (like clean clothes to wear). We all know it requires self-discipline to ignore the urge to continue being lazy or engaging in mindless activities, and turn our attention to the things we need to do and rationally want to be doing to move our lives forward.

Because we often have two competing lines of thinking—one that wants to be productive and one that wants to indulge—we end up with a sort of cognitive dissonance or inner conflict. To relieve this debate in our minds, we tell ourselves that we’ll stop engaging in the pleasurable behavior…but only after we do it one last time.

When we declare and believe this, it seems to allow the rational brain to check out, and allows the primal brain to take over. The one last time statement temporarily quiets your higher brain’s plea for you to do something better with your time, and for a little while, this solves the dilemma of whether you should or shouldn’t be indulging. You basically give yourself permission, and there is definitely some relief in making that decision—which allows you to enjoy whatever you are doing with more peace of mind. In effect, saying one last time appeases the higher brain while giving the lower brain what it wants.

It appeals to the higher brain because one last time does seem like a logical thought, and I think that sometimes it can be—especially when the behavior is not harmful and when it’s not a well-worn habit. However, as behaviors are repeated, the one last time mentality becomes part of habit formation and a significant reason why the habit persists. In other words, the one last time mentality may initially begin as a rational thought (that attempts to balance your more primal desires with your higher goals), but then it becomes an automatic thought that keeps you in a rut.

One Last Time Does Not Satisfy

Sometimes we do stick to what we say about it being the last time, but that usually requires some effort—because when the stated last time ends, the primitive brain’s desire for pleasure is still there. It can be frustrating to realize that even though you said it would be the last time, you still want more. It can be discouraging to realize that you still feel unsatisfied, and this is why you may find yourself saying one last time again and again—until you feel exhausted and ashamed. It’s as if you are chasing the feeling of satisfaction that never arrives, and instead, guilt arrives in it’s place. Once you understand your lower and higher brain, you realize that you simply have to pull yourself away from the pleasure at some point—whether you feel satisfied or not.

In commonplace circumstances, the one last time mentality isn’t really a big deal. We do eventually turn off the tv, we manage to get out of the shower, we pull ourselves away from Facebook, and we get out of bed. We may waste more time on mindless, lazy, or pleasurable activities than we would like, but who doesn’t deserve a little pleasure?  The point where some normal indulgence becomes unhealthy overindulgence is not always perfectly clear, and it’s different for everyone based on their goals, preferences, and responsibilities. Even though the one last time thought stems from your lower brain’s desire for temporary pleasure, you can still choose to follow it—that is, when doing so isn’t going to be harmful, like in binge eating. The goal is not to become a perfectly rational being who is always productive and never experiences pleasure.

Pass on the Last Binge and Stop Binge Eating for Good

When your binge urges first appeared, you probably felt powerless to resist them for any length of time, so you might have reasoned that you’d binge one last time and then be done. Your stated commitment to quitting gave you a justification to just go ahead and give in to the urge. It makes perfect sense that you’d want a reason to give in, considering how uncomfortable and unsettling the urges can feel. By giving yourself permission to binge one last time, you got immediate relief from all of the anxiety and craving that the urge caused—but ultimately, each “last” binge made you feel awful, and the relief was never worth the pain.

This gets back to what I discussed earlier about one last time thoughts being an intersection of the lower brain and higher brain—expressing the higher brain’s desire to stop the behavior, and giving the lower brain what it wants right away. But, if you take time to think about the one last time thoughts a little more deeply, you’ll realize that they are not at all supporting your higher brain’s commitment to recovery, even though it can seem that way at times.

If having a last binge somehow helped you quit, then maybe it could make some logical sense, but that last binge only makes things worse—every time. There was never a time when I thought, “I’m really glad I binged that one last time.” I regretted each and every last binge. I always wished I had not done it. I always took a step back in recovery because of it. Every last binge solidified the habit in my brain.

If the one last time thoughts were truly expressing and supporting your desire to stop binge eating, those thoughts would not encourage you to binge. A thought that is in line with commitment to recovery never drives you toward the harmful behavior. Think about someone in your life who cares about you and wants you to be free of binge eating…would that person tell you that you should go ahead and binge one last time? Of course not; it makes no logical sense if your goal is to quit. (This does not mean that you’ve failed if you do follow an urge—you can always get back on track after a binge).

In the Brain over Binge approach, the urges to binge are the only direct cause of binge eating. Urges to binge include all thoughts, feelings, and physical sensations that encourages binge eating—and since the one last time thoughts encourage binge eating, they are part of the urge. Therefore, you can treat those thoughts like any other binge-encouraging thoughts and dismiss them as meaningless, powerless, and harmless neurological junk. When it comes to recovery, it doesn’t matter if these thoughts originally had some sort of rational basis—because now, the thoughts are automatic and are keeping you in a destructive cycle.

If you want extra guidance as you use the Brain over Binge approach, here are some resources for additional support: