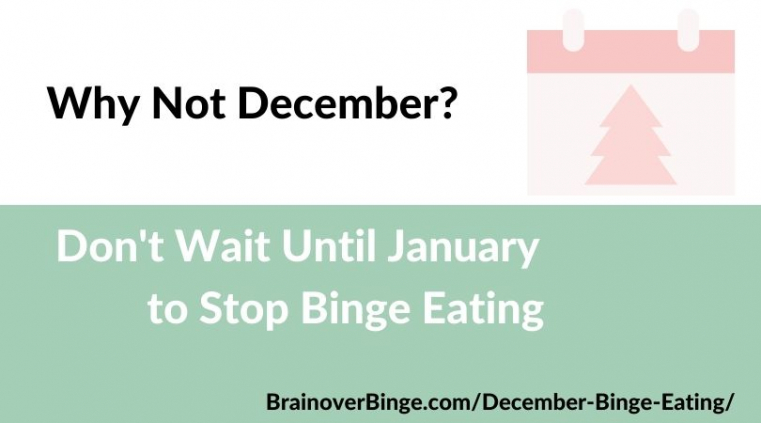 It’s been a tough year, and I want to help you end it on a positive note—with progress toward recovery. Even if you’ve previously struggled with increased binge eating in December, this is your chance to do things differently, and have this month be a successful one.

When I was a binge eater, the final weeks before the new year usually included my worst binges. I’d often have thoughts like…

“I can’t stop binge eating now, there is too much tempting food this time of year.”

“I’m too busy with the holidays to even bother with recovery.”

“I will binge all I want through the end of the month, and then quit on January 1st.”

Telling myself I’d quit at the start of the new year seemed to give me a pass in December—to binge as much as my lower brain wanted. That primitive part of my brain seemed to view the days leading up to January 1st as a non-stop binge opportunity.  At the time, I didn’t understand how my lower brain worked, and I thought my binge urges were expressing my true desires. I also thought that I was emotionally broken and “needed” to binge to cope with the holidays. So, I went along with my lower brain—all the while telling myself that I’d leave binge eating in the past once January arrived.

What I didn’t know was that my lower brain was repeating a habitual and predictable pattern that’s common in binge eaters (and really in anyone with a destructive habit). I’ll call it the “one last time” rut, and when binge eaters get in this rut, they repeatedly promise that each binge will be their last, and promise to quit afterward. I explain this pattern in detail in Episode 14: Overcome “One Last Time” Thoughts to Quit Binge Eating.

Because you feel committed to quitting on January 1st, you might stop any attempts to curb your binge eating at the end of the year. You may allow your lower brain’s desire for the temporary pleasure of binges to completely run the show.  You end up feeling awful from the binges in the December, but when you remember that you’ll quit in January, you see no point in even trying to stop now. You just accept that you’re going to keep bingeing until the clock strikes midnight and marks a new year—and a new you.

During all of the the years of my binge eating, January 1st always came with a sense of dread. I wondered if I could really quit, and felt confused and frustrated that my desire to binge was still the same on New Year’s Day that it had been on New Year’s Eve. In December, it was comforting to believe that a new year would bring a swift recovery; but looking back, my resolutions usually only served as excuses to binge prior to the resolution’s start date. If I told myself I was quitting tomorrow, next week, next year; it gave me reason to binge today, this week, this year.

On January 1st or shortly thereafter, I began to resent the new year—because of the struggle of trying to avoid binges.  I often wished it was December again, when I felt like I could just binge without even considering quitting, even though I knew December had been miserable. Until 2005, nothing I tried to help myself quit had worked, and I always found myself binge eating again by about January 5th.

In Brain over Binge, I talked about that first New Year’s Eve (15 years ago) when I didn’t have to make a resolution to stop binge eating. I wasn’t with family or friends or at a party—I was simply alone with my thoughts, watching others ring in the new year on television (where most of us will be this year as well). It was a wonderful feeling knowing that the next year would be different—that I wouldn’t just binge again a few days, and that I’d never have to resolve to quit binge eating again, because I was already done.

No matter what your thoughts are saying now in December, your binge eating habit will not suddenly disappear come January 1st.  The lower brain has no regard for time, and it will send urges automatically no matter what day or year it is. You will not suddenly gain the ability to avoid binges, unless you support yourself in learning how to do that.

You don’t want to spend another December being miserable, promising yourself you will do better in January. You can do better now. You can learn to recognize all of those faulty brain messages that drive you toward binge eating, and stop believing them. You can stop believing thoughts that say it somehow makes sense to binge through this month. You know that it doesn’t make sense, and you can absolutely break this cycle.

Just think of how amazing you’ll feel if you gain control of your binge eating before the new year, before the start of your typical resolution. Challenge yourself to do something different this year—break the pattern, and stop waiting until later for freedom from binge eating.

If you want extra guidance during the holidays or at any time of year, here are some resources for additional support:

Brain over Binge Course – Self-paced online lessons (plus an app) for only $18.99/month. Includes over 120 tracks to listen to that give you the information and answers you need as you end binge eating.