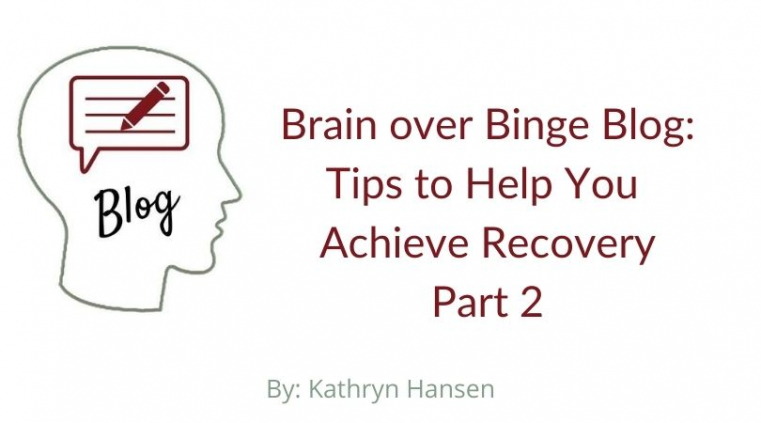 In order to end the binge eating habit, it’s necessary to stop acting on the urges to binge. You are trying to de-condition a habit, and to do that, you want to stop reinforcing the brain pathways that leads you to binge. Once the binge urges no longer lead to binge eating, the brain will gradually stop producing the urges. This is because the brain has the ability to change based on the actions you take or don’t take, and this is called neuroplasticity.

In my books, blog, and on the Brain over Binge podcast, I share ideas and principles to help you avoid acting on binge urges, and you can get all of the basics in my free PDF. You can also read many additional ideas and insights in Part I of this blog series. But I want you to know that, when it comes to how to stop acting on urges to binge, there isn’t one exact “right” way, and different ideas work better for different people. Also, the experience of avoiding a binge feels a little different for everyone. I’ve found that the best tips for using the Brain over Binge approach and for recovery itself come from the people who have succeeded.

Over the years, I’ve had the opportunity to hear a lot of women and men describe their own experiences and what helps them detach from binge urges and stop acting on them. I want to share the experience of one woman below, who explained to me what was helping her, and gave me permission to share it on my blog. I really liked the analogy she described, which helped her visualize herself as separate from the urges to binge. Hearing someone else’s experience can spark your own insights, and help you change your own perspective in a helpful way. I hope you benefit from reading her tips and success story:

While I was reading Brain over Binge, I had a light bulb moment. What the light bulb illuminated: “This book could be a real game changer for me. Am I ready to take the big step of having my game with food entirely change? Yes, I am!” And indeed, I am on Day 37 binge-free. I truly feel that binge eating has moved into my past.

My problem with resisting binge urges, for many years, can be summed up with one word: inevitability. It sounds ridiculous to me now, but I truly believed, for the longest time, that my binge eating was inevitable, handed down from above, totally out of my control. What helped me to overcome it unfolded in a series of steps: I happened to be reading, in the book 59 Seconds, a review of several different studies on what factors most enable people to achieve big long-term goals. When I looked at the list of factors, one of them stood out: “Go public.” The author recommended, based on solid evidence, that if you want to achieve something big, you should announce it to the world—kind of like giving a press conference. As a result of that tip, I got online and went in search of a public forum, a place where people announce their goals and give each other support, and announced my big project.

The next step, based on something else I read in 59 Seconds, was setting “mini goals.” One of the tried and true techniques in accomplishing a big goal, is to break the project up into smaller sub-goals, and work on them one at a time. So I set myself my first mini-goal: “Go 30 days without any binge-type eating.” (I think the longest I’d ever gone between binges was 13 days.)

The next step came, then, when I was putting techniques from Brain over Binge to work, where the rubber meets the road, in dealing with a real-life urge to binge. What it felt like, to me, was a mental feat. Since my most recent experience with pulling off mental feats is memorization (at the advanced age of 58) of vocabulary in a foreign language, I found myself reaching for one of the mental tools I’ve learned—specifically, vivid imagery (visual plus other senses) with some sort of action going on.

Let me formulate this as a tip for you, in confronting your own urges to binge. As soon as the urge arises, look for some way of dramatizing, in pictures and sounds, how you, as the higher self, are very separate from the binge urge, which is “neurological junk.” For example, I thought of myself as a cool cerebral character playing chess, in a room where a ridiculous little yappy dog (the urge to binge) is trying to get me to play fetch with it. I imagined the dog as having a high-pitched yelp of a voice, barking away, and I imagined it holding the ball in its mouth and doing everything in its power to get my attention—butting my legs, knocking against the chess board, and so on.

Meanwhile, I am not exactly ignoring it: I am merely observing its frantic, silly behavior while I contemplate my next chess move. (Since I’m a higher being, I can do both of those things at once.) I’m not saying anything to the dog, nor am I reacting to it in any way. I don’t need to tell you the end of this story, because it’s obvious: the yappy dog eventually gives up and wanders off into another room.

You can use, adapt, that little drama however you like, or better yet, come up with a new one of your own, but take care to make the scenario very specific (imagine the dog’s little ratty tail), with more than one sense (visual, auditory, etc.) involved, with some kind of action taking place. The more ridiculous—even humorous—you make the urge to binge appear, the more easily you can be in the role of cool, calm, collected observer.

I’ve had very few urges to binge since coming up with the yappy-dog scenario, and the ones that have arrived are so attenuated, they just float up briefly into my consciousness and drift away. To reinforce the thought that my binge urges are in the past, a couple of times I have visualized myself actually bingeing, and I’ve observed how the visualization, as if made of old fragile film stock, has a lot of little white and black blobs obscuring the view, like pixelated static, as it drifts further and further into the past. 37 days may not seem very long, but believe me, that behavior is ancient history. The last time an urge to binge surfaced, I just thought, “What’s this? We don’t do that anymore!” and the urge went poof! and vanished.

Thanks to all of you who’ve read this far, and best of luck in getting your own urges to binge into ancient history!

For more tips and guidance as you end binge eating, you can download the free Brain over Binge Basics PDF, or learn more about my Course.

Episode 55: What a “Simple” Approach to Binge Eating Recovery Means...