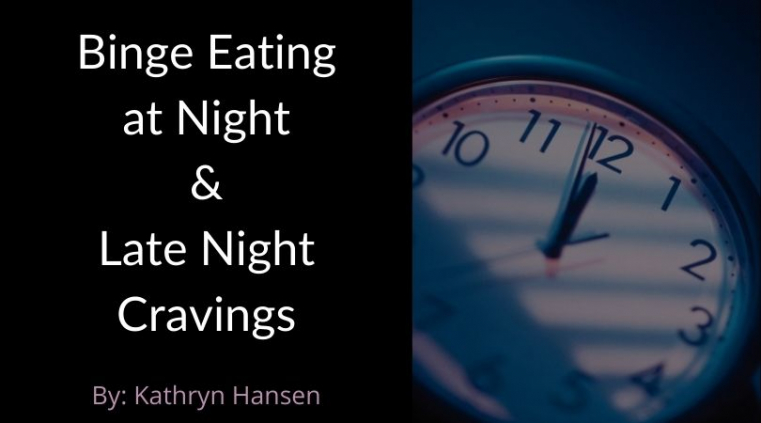 It’s common for binge eaters to primarily binge at night; and even after binge eating stops, you may still find yourself having late-night food cravings. Some people are bothered by these cravings, and wonder if giving in to them means that they are overindulging; or conversely, if ignoring those cravings means that they are being too restrictive. Everyone has to navigate the balance between restriction and overindulging, and at night is when we usually have the most opportunities to do that. Most people don’t get up in the morning craving a piece of cake, but after the work of the day is done, that piece of cake may seem much more appealing.

An important thing to know as a recovering binge eater—or anyone who feels like they eat too much at night—is that night food cravings are very common. One study found that appetite and interest in food peaks at around 8 pm, as part of our natural circadian rhythm. So, when you find yourself craving a sugary snack after dinner or after dark, know that you are not alone, and there is nothing wrong with you. There are many theories as to why this is so, and you can read about some of them in this article: The Science of the Midnight Snack. From an evolutionary perspective, night eating had a survival advantage in that it helped our ancestors store calories more efficiently when food was less abundant. Even today, we live in a sort of “hunting” mode during the day—working, moving, and doing—and once we slow down at night, our survival mechanisms recognize this and give us a “time to eat!” signal. It’s as if we are wired to want to eat more at night to replenish the energy stores we lost during the day, and store up more for tomorrow.

We tend to crave sweets at night not only to replenish and store up energy, but for quick energy in the moment. At night we are tired and our brains are energy depleted. If we choose to stay awake or have to stay awake, our brains will naturally view sugary food as attractive and rewarding because it is a source of quick energy. Sure, a banana would do the trick, but for most people, that’s not what is the most appealing after dark. Our self-control functions are at their weakest when we are exhausted, so it’s no wonder that many people don’t make their healthiest food choices at night.

For people struggling with binge eating, these natural mechanisms can make them more likely to experience (and give in to) urges to binge at night; or their decision to follow a night craving leads to thoughts that say: “I’ve already blown it, so I might as well binge.” Instead of learning of the normalcy of late-night cravings, binge eaters often learn that wanting to eat at night is a signal that they aren’t emotionally fulfilled, or that their day was too stressful, or that they didn’t eat the right foods for breakfast, lunch, or dinner. While stress, sleep, and diet patterns certainly can play a role in the frequency and intensity of night cravings, realizing that this type of heightened interest in food—especially junk food—is normal may help you spend less time asking why, and instead focus on some useful strategies to manage the night cravings when they occur.

Common advice for dealing with night eating is to keep healthier food options in the house, make sure you are eating enough throughout the day, eat dinner a bit later, do some light exercise at night, stay hydrated, make plans for when cravings hit, or just go to bed earlier. These common suggestions are certainly useful, but I want to go beyond that and give you 4 more things to think about when night cravings hit. These 4 tips can be helpful whether you are still binge eating at night or if you simply feel like you are eating too much after dark.

1: Stop Telling Yourself You Shouldn’t Eat at Night

We’ve all heard the popular advice that eating late leads to more weight gain, but this idea is actually rather controversial. While some experts say that the body doesn’t process and use food and calories well at night, so night eating can lead to weight gain, others claim that eating late at night is actually better for fat loss. Here is an article that says overall food intake matters more than timing, and it’s possible that the any observed link between late night eating and weight gain is not a causal relationship.

It’s important not to take all weight loss advice at face value and use it to make rigid rules for yourself. Telling yourself, “It’s late, I shouldn’t eat anything” can lead you to want to eat more—because anything that is forbidden in your mind becomes more appealing. You have freedom to eat at night if you want to, and only you can make that choice. I frequently have a snack before bed, and I’ve also eaten in the middle of the night from time to time since I recovered from binge eating. I’ve struggled with insomnia at various points, and during those sleepless nights, I’d eat about every 2 to 3 hours. I didn’t plan the intervals—that’s just when my body would naturally signal hunger. I’ve also been awake all night countless times with my babies, and I’ve spent long nights writing; and again, I eat when I’m hungry. The reason most people don’t eat in the middle of the night is because they are sleeping, not because they are telling themselves that they “shouldn’t”. If you are awake for one reason or another, don’t beat yourself up for being hungry and having some food.

If you decide to eat something at night—either before bed or if you wake up in the middle of the night—don’t do it in a guilt-ridden way. Own your choice and enjoy the food. It sometimes helps people to put the food on a plate and sit down to eat, instead of standing at the refrigerator.  This makes your choice to eat feel more like a well-thought out decision instead of an impulsive one.

When I was in therapy for bulimia and binge eating disorder, I worked with a nutritionist who created a meal plan for me. She spread out my calories evenly during the day, which is fine; but it didn’t quite feel right to me and now I understand why. I didn’t find myself wanting a big breakfast or lunch, and found myself basically forcing in the food. Then, I’d come to the end of the day not feeling like my dinner or bedtime snack was big enough. I’d become frustrated and resentful; and if I decided to eat something extra late at night, I’d feel so guilty that I wouldn’t truly enjoy it. This mindset often led directly to urges to binge at night, and I’d proceed to eat thousands more calories after my snack. My therapist explained that this night binge eating pattern stemmed from emotional issues.

Now, looking back, I can see that I simply needed more calories at night. I was an athlete at the time, and big meals during the day weren’t practical because they made me feel sluggish and full for track practice—which was usually twice per day. I needed more at night because that’s when my body signaled me to replenish my energy reserves. Altering my eating plan wouldn’t have stopped my binge eating (because I didn’t know how to dismiss the binge urges at the time), but there was simply no need for me to beat myself up over wanting to eat more at night. I should have eaten a little less during the day to fit my lifestyle, and then enjoyed a larger dinner and bedtime snack, without all the shame. Everyone has different patterns, so trust yourself to settle on eating times and amounts that work for you.

[If you feel like you need one-on-one support in creating a meal plan for yourself and nourishing your body during and after bulimia/binge eating recovery, Binge Code Coaching specializes in this.]

If you are waking out of a deep sleep in the middle of the night feeling hungry, it could be a blood sugar imbalance. Of course, if you have any blood sugar problems, you should always seek a doctor’s advice. Here I’m talking about a simple dip in blood sugar that is making you feel like you need to eat something. You can try sipping some diluted juice before eating to take the edge off of the craving, and that has the added benefit of hydrating you—to ensure your craving isn’t partially due to thirst.

Then, if you are still feeling hungry, you will be in a less ravenous state and you can make a more rational decision about what to eat. I realize you don’t want to do this every night because it interrupts sleep, so as a long term strategy, you’ll want to balance blood sugar overall, and you can get nutritional support to do that. Some people find it helpful to eat something right before bed that will help regulate blood sugar—including protein, healthy fat, and possibly some high quality carbohydrates.

4: Use Detachment from Cravings in Conjunction with Other Strategies

Even if you stop binge eating at night, you might find that your night cravings still feel problematic. You can be confident that you never have a follow a night craving (or any craving) with a binge, but it makes sense to start addressing the night cravings. These type of cravings are more common if you are overtired, overworked, or overstressed, so working on those areas can often tweak your physiology enough to reduce nighttime cravings. Meditation, exercise, and supplements may also have a place in balancing your body. However, there will inevitably be times when life is rough, and stress is inevitable, or there is no time to meditate or exercise, or you have no extra money for supplements.  That’s why it’s important to know that you aren’t powerless when it comes to any type of craving.

Yes, it’s normal to have night cravings; yes, it’s okay to follow them; and yes, it’s great to enjoy whatever food you choose to eat at night—but you are still capable of a drawing a line when enough is enough, or deciding to simply say no. You can detach from night cravings just like you detach from binge urges. You can choose not to act on a night craving just like you choose not to act on an urge to binge. You don’t ever need to make night eating off-limits, but know that you get to decide the place that night eating has in your life.

For more help with ending binge eating at night (or at any time of day), you can download the free Brain over Binge Basics PDF, or learn more about my Course.

“My Case is Different”: When You Feel Your Unique Problems Prevent...