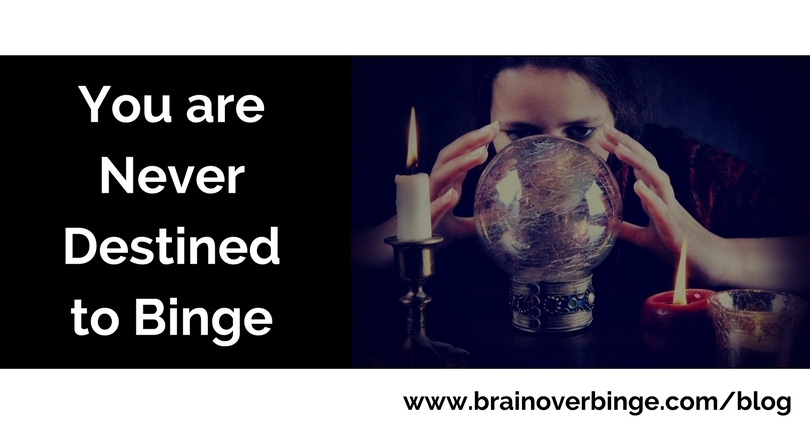 Do you ever have thoughts that say, “you know you’re going to binge eventually, so you might as well just do it now”?

If you do, you are not alone.  I had a client refer to these type of thoughts collectively as the binge inevitability mindset, and I think it’s an accurate way to describe this form of neurological junk.

Your lower brain’s job is to drive you to binge now; it has no conception of the future and is not involved in your long term plans. The lower brain just produces its programming–including the automatic thoughts, feelings, and physical sensations that drive you toward a binge.

Lower Brain “Predictions” are Not Truth

The lower brain doesn’t actually know that you’ll binge in the future, so this binge inevitability mindset is, of course, faulty logic.  There is no wise entity in the primitive part of your brain, especially not one that can predict your future actions.  In fact, the lower brain has no actual control of what actions you take in the future.  You, in your higher brain, have ultimate control of whether or not you binge.  You can choose to act or not act on lower brain thoughts and urges, so the thought saying “you will inevitably binge” has absolutely no basis in fact.

Where Binge Inevitability Thoughts Come From

You likely had binge inevitability thoughts for the first time during your early days of binge eating.  The binge urges made you feel out of control, so that it didn’t actually feel like you had a choice and it did feel like you were destined to binge.  If you did not understand your binge urges, and how to detach from them, then it made sense that you thought future binges were inevitable.

Because binge inevitability thoughts got you to take action and binge (which is what the lower brain sensed that you needed), the lower brain learned, and those thoughts became conditioned as part of the habit.  Now, your lower brain keeps mindlessly and automatically producing those thoughts.  If you believe those thoughts and follow them, the thoughts will keep coming indefinitely; and then the idea that you are “destined” to binge becomes self-fulfilling.

A Binge is Never Inevitable

If you can recognize this binge inevitably mindset when it comes up, you can learn to separate from it. You know now that you are never destined to binge. You were not born binge eating, and you don’t binge in every moment and in every situation.  You binge when you follow your urges to binge, and if you know how to avoid following your urges to binge, you won’t binge.

An urge does not represent an unavoidable force.  It’s only the product of temporarily faulty brain wiring, which you have the capacity to change–in a real, physical way using neuroplasticity.

The binge inevitably mindset may come up more often when you are trying to fight urges to binge.  If you are trying to argue with the urge, or trying to will the urge away, that urge can feel so bothersome that you think you will eventually tire out and just give in.

If you are in that habit of fighting urges, then even as soon as the urge appears, you may have a thought like this: “you might as well binge now to avoid the struggle, because you’re going to give in later anyway.” Although the thought is certainly neurological junk, it is more likely to seem true if you are engaged in a fight with the urges, or you are trying to avoid an exhausting fight.

Fighting the urges is not an effective strategy and actually strengthens the urges.  The goal is to be aware of the urges and the habitual way they show up, and not fight them. When you allow the urges to be present without arguing or turning attention toward them, it no longer feels like a tiresome battle. And then you can more clearly recognize any thoughts saying that “you’ll eventually binge” as false.

When it feels easier to experience the urges without acting on them, it’s easier to see that you aren’t destined to binge.  Try to simply notice the urge, acknowledge it, not be upset that it is coming up, and then gently–without the struggle or fight–go on with you life.

You Get to Choose

Believing thoughts that say “a binge is inevitable” creates a feeling of helplessness, powerlessness, and defeat, and that state of mind is not conducive to dismissing urges. Remember that you always have the power of choice when binge urges arise. If you choose to follow the urge, you will inevitably binge. If you choose not to follow the urge, you inevitably won’t binge.  Empowering yourself in this way puts you on a path to create your own destiny.

To learn more about creating an empowered mindset when facing urges, and how to stop acting on them, you can download my free eBook The Brain over Binge Basics.

If you want extra guidance as you work on the recovery goals of the Brain over Binge approach, here are some resources for additional support: