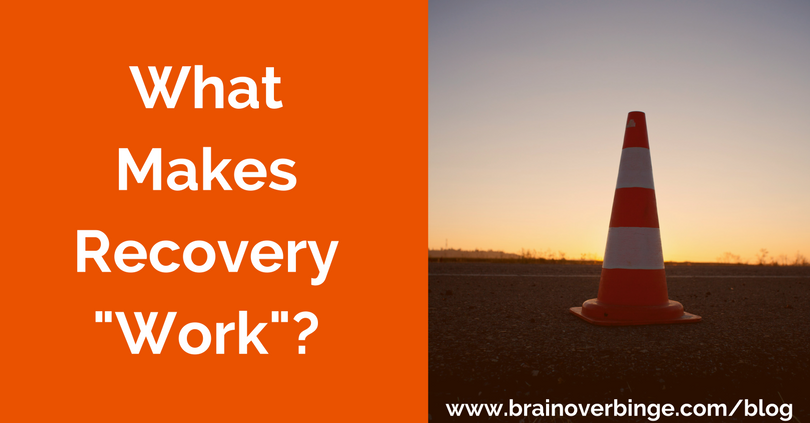 I know a life free of binge eating is completely possible for you, but if you are like many binge eaters who I’ve spoken to over the years, you may have a hard time believing that right now.  You may have searched for years for a cure, for something to “work,” for it all to just click so that you will no longer binge.  You may feel exhausted and frustrated by the search.

You may be someone who has already read my books, and you could be thinking that the method I used “worked” for me rather quickly, so it should be the same for you.  You may believe that if the concepts from my books do not work right away, then you need to look for a new approach that will work.  It is certainly possible that another approach may be a better fit, but if you are someone who has jumped around from one approach to another, I want you to take a minute to think about what you believe makes a recovery method “work.”

If you are holding the common belief that a recovery method only works if it gets rid of your binge urges right away, or at least very quickly, this could create some problems for you in recovery.  If ‘getting rid of the urges right away’  was the measure of a successful recovery method, then the Brain over Binge approach actually didn’t work for me either.

Seeing my binge urges as meaningless, powerless, and harmless neurological junk from my lower brain didn’t make those urges go away right away, or even all that quickly. The new mindset I had changed how I perceived my urges, and it rather dramatically made me feel my own ability not to act on them.  But, the urges were still there for a while.

I had to avoid acting on every binge urge until they did completely go away – about 9 months from the time I adopted my new approach.  Not once during those 9 months did I think “this isn’t working.” The reason for this was that I defined success not by whether or not I had urges, but by my ability not to act on them.

In the beginning of recovery, the binge urges came frequently…and I wasn’t perfect.  There were two times when I did act on the urge. The first time, I heard those familiar, lower brain reasons why I should binge, I felt the familiar craving, and I mistakenly thought it was the real “me” who wanted to binge, and I acted on it.  The second time I binged, I had much more awareness of what I was doing, but ultimately, I did still act on the urge.

When I acted on those two urges, I didn’t proceed to throw out the principles that I’d learned, because they didn’t “work.” I realized that in those specific instances, I had not applied what I’d learned, and I had simply followed the urges.  I did not think that I’d failed or that I needed a new approach.  I recognized that I had the power to avoid acting on the very next urge and to keep my recovery going.

During those 9 months of having urges but not acting on them, I never wished the urges away or took their presence to mean something was wrong.  I believe this was a big component of what allowed the approach to be effective.

My own recovery and my experience helping others has led me to believe this:

No matter what approach you use, the crux of recovery comes when you have a thought, feeling, or impulse encouraging you to binge, but you don’t.

When you are able to do that over and over, your brain changes, the urges gradually do go away, and your binge eating habit is erased.

If you want help in increasing your ability not to act on binge urges, and you are new to the Brain over Binge approach, you can get started with my free eBook.

If you want extra help in making recovery work for you, the Brain over Binge Course is composed of over 125 audios to guide you and encourage you, including one audio you can listen to when you are having an urge to binge—to help you avoid acting on it. You can get access to the complete course for only $18.99 per month.