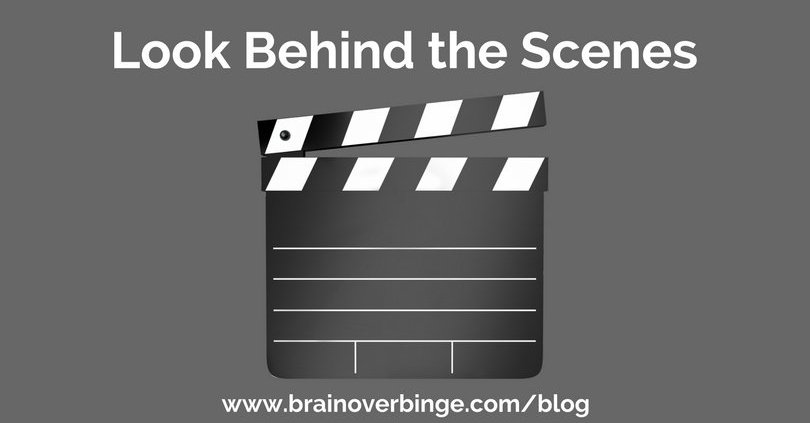 I had a conversation with my daughter a couple of weeks ago that immediately inspired an idea for this blog post.  It all started when my oldest son, who is 11 and not scared of much at all, wanted to watch a trailer of a movie about aliens.  The trailer wasn’t too scary in my opinion, and he watched it a couple of times before my 9-year-old daughter became interested.  I figured it would be okay for her to see it as well, and she seemed fine at the time; but later, she told me that a certain image of an alien scared her and she couldn’t stop thinking about it.

After some initial “mom guilt” for letting her watch it in the first place, and telling her no more scary movie previews, I told her simply that it wasn’t real and there was nothing to be afraid of.  Later, she brought it up again, and I said that her fearful thoughts about it would pass, and to try to focus on other things. After she brought it up for a third time, I started thinking of how I could do a better job of easing her mind.

Then, I remembered something my father used to say when I was scared of movies. He used to tell me to picture the camera operators recording the action, and to imagine the director, sound equipment, lighting…etc. behind the scenes. He told me to imagine the actors messing up while filming the scene and having to redo it over and over. He basically told me to turn my attention from the events happening on the screen and think about the events that created that scary scene in the first place.

I explained all of that to her, and also told her to see the people working to produce the amazing special effects that make it look so realistic. As we talked, I could see something shift in her. It seemed to really resonate and ease her fear, and she even laughed a little bit at imagining the movie from a new perspective.

As soon as the conversation was over, I immediately thought about how this “behind the scenes” view of a scary movie is related to binge eating recovery.

When you are looking at any of your harmful eating-disorder thoughts (including binge urges) from one angle, they can look real and powerful and can create feelings of fear.  But, when you shift your perspective and look at those same thoughts and urges from another angle, they can look and feel completely different.

For example, if you look at your urges to binge as an indication of something you truly want or need, you’ll likely experience strong feelings of desire, and you’ll feel compelled to act on them.  Viewing the urges as meaningful and powerful signals can make binge eating feel almost inevitable. But if you can instead look at where the binge urges are coming from – from a primal, instinctual system in your lower brain that is designed to maintain your habits – they will feel less intimidating.  If you can see that the binge urges are automatic, faulty signals that have no real meaning to you, you can simply move on with your life without being affected.  It’s the same with urges to engage in restrictive dieting. If you can view those urges to restrict as devoid of any truth or value, you may even find yourself laughing off thoughts about going on another diet.

You should know that, even with a new perspective, you may still experience some uncomfortable feelings, and I suspect this was the case with my daughter as well, in regard to the movie trailer. She likely still had some fearful thoughts, but the new “behind the scenes” perspective made it much more manageable, and gave her something to turn to, to ease her mind.  It’s the same in binge eating recovery. Even though some feelings of discomfort, anxiety, fear, or frustration may arise, you can tolerate those feelings as you move toward lasting change.

Being that it’s Halloween in the US when I’m posting this, there is another analogy I’d like to use to illustrate how looking behind the scenes allows you to manage uncomfortable feelings…

Let’s say you go in one of those “haunted houses” on Halloween where people dress up in costumes to intentionally scare you.  Even though you know it isn’t real, you probably still have some fear (of course you do, that’s what you pay for in a haunted house!). But, your fear is tolerable, because you know what’s behind the scenes. You can visualize the people behind the masks, just having fun trying to act as scary as possible.  You know it’s harmless, and you can even laugh at yourself when you jump with fright or when you scream.  If you thought it was real, the experience of an haunted house would be too terrifying for anyone.

Whether it’s a haunted house, a scary movie, or an eating disorder thought or urge, when you know how it all works, it allows you to experience it without feeling so threatened.  You no longer feel like you have to run and hide, fight back, or do whatever you have to do to make the thoughts and uncomfortable feelings go away.  You stop feeling like you have to jump into action and perform harmful behaviors. You can simply step back, look behind the scenes, and realize that you are safe.

If you want extra guidance as you end binge eating, here are some resources for additional support:

Brain over Binge Course – Self-paced online lessons (plus an app) for only $10.99/month. Includes over 120 tracks to listen to that give you the information and answers you need as you end binge eating.