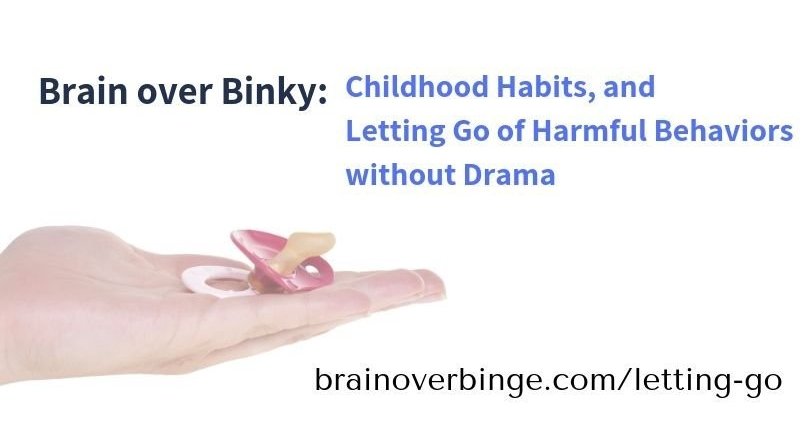 My four-year-old son gave up sucking his “binky” (pacifier) a couple weeks ago. We had already reduced his use of it during the day, but he was still very attached to it at naptime and bedtime. We decided to offer him a reward to quit. We let him pick out a toy in exchange for his pacifiers, and he’s been thoroughly enjoying the airplane set he chose, and he’s seemingly forgotten about his pacifiers.

This is a kid who I could have never pictured without his pacifiers. When I think back to his baby years, the main image in my mind is him looking at me with big blue eyes and sucking away on his pacifier. When he was very young, we couldn’t leave the house without a binky, and when I kissed him goodnight, I had to always make sure he had one for his mouth, and a couple extra in his bed so he’d be sure to find one if he woke up in the middle of the night. He loved his binkies, they were his favorite way to self-soothe.

An Lesson in Simply Letting Go

I didn’t think it would be as simple as it was for him to give up the pacifiers. He had a few nights where he slept less and fussed more, but now, he acts like he never had them in the first place. My husband and I were prepared to give him lots of extra comfort during the initial “withdrawal” phase; but it turned out that he was fine without them. He stopped performing the habit, and in turn, the desire for the habit seems to have gone away already. I can’t be absolutely sure because I haven’t talked about the pacifiers in over a week, as I don’t want him turning attention to them unnecessarily. I told myself I’d only talk about them if he started the conversation; but he hasn’t, and because he’s a very talkative kid, I think this is good evidence that he’s not thinking about the pacifiers.

Observing my son simply let go of this habit that he was so attached to just weeks ago has me thinking about how people – young and old – have the ability to give up bad habits without much drama. I’ve been drawing parallels between a child giving up a pacifier and adults giving up their harmful behaviors and addictions. I believe that if adults who struggle with destructive habits could model the example of young children, then giving up those habits would be much less complicated.

Was my son “addicted” to his pacifier? I realize that the word “addiction” can be charged and has different meanings to different people, but I think I could argue that yes, he was addicted to his pacifier, even though there was not a chemically-addicting substance involved. But, did being “addicted” mean he was flawed or broken or had underlying emotional issues he needed to resolve? Absolutely not. Did being “addicted” mean he was not capable of simply stopping the behavior moving on with his life? No. And, I want to encourage binge eaters to believe that they are also capable of simply letting go.

The way I quit binge eating was indeed very similar to the way my son quit using his pacifiers. I stopped letting a binge be an option. I decided that I didn’t do it anymore, no matter what, and the urges to binge faded when I no longer acted on them. It did take longer for my urges to binge to go away than it seemed to take for my son to lose his desire to suck his pacifiers; and this is possibly because a child’s brain is more plastic and more easily changed than an adult’s. Nevertheless, my brain moved on and developed new neural pathways; and I developed new interests and things to think about; and the feeling of wanting to binge became merely a memory.

Your Lower Brain May Act Like a Child, but Your Higher Brain Can Guide You to Freedom

A difference between my son and me was that my son wouldn’t have chosen to stop sucking his pacifiers on his own, at least not anytime in the near future. He needed my husband and I to tell him when it was time to stop, and take the pacifiers away. Likewise, the more primitive part of a binge eater’s brain (which I call the lower brain) is “addicted” to binge eating and wants to continue the habit indefinitely, receiving whatever temporary pleasure and comfort it brings. The lower brain needs a higher authority to say “it’s time to stop,” and in adults, that voice of reason is the prefrontal cortex (which I call the higher brain). The higher brain is the part of you that knows binge eating is not what you truly want, and it is the part of you that is capable of dismissing the urges to binge. *For help learning how to dismiss the urges to binge, you can get my free eBook.

If, right now, you believe your binge eating brings you comfort and pleasure that you can’t live without, just think of all the children who bravely hand over their binkies, or stop sucking their thumb, or stop carrying their favorite blanket everywhere they go. I know that not all children give up their habits as easily as my son did, but even if there is a difficult phase in the beginning, the child eventually stops and it just isn’t that big of a deal.

I am not trying to minimize the problem of adult addictions by comparing them to childhood habits, but I am trying to help you see that quitting a harmful behavior does not have to be so complicated. It also does not have to involve a major personal transformation or solving your life’s problems. Deciding to give up a harmful habit does take courage, but it’s well worth it, and it may not be as difficult as you think. After a couple of weeks binge-free, you may be surprised to feel your desire to binge fading quickly. You’ll feel confident when you realize you didn’t truly need the habit after all, and you’ll feel free when you realize you are so much better off without binge eating in your life.

The Brain over Binge Course will help you let go of ideas that are making habit change more complicated than it needs to be, and help you tap into your own power to end binge eating without drama.

Episode 56: Focusing on Childhood Issues in Therapy for Binge Eating