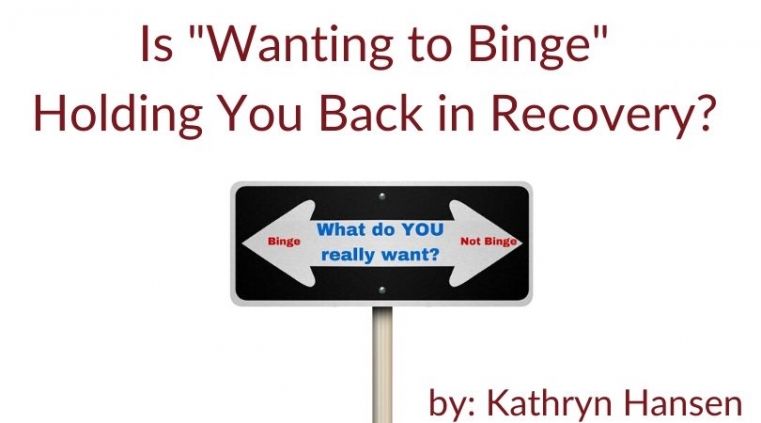 Today, I’m going to address an issue that may be causing you some confusion and stagnation in your recovery. The issue is a common inner conflict, which can be described like this:

Wanting to binge, while also knowing that you want to recover.

Any eating disorder recovery program or philosophy would agree that wanting to recover is necessary for lasting success. If you’ve sought out recovery resources like my blog, you can rest assured that you have enough desire for recovery to move you forward. If you didn’t want to recover, you’d be binge eating and purging without regret and without feeling the need to change. But the reality is, you are experiencing enough consequences in your health and your life to want to move beyond bulimia.

The problem is: you don’t feel that desire to recover all of the time, especially at times when you feel you want to binge.  During those times, it can be tempting to give up altogether, or at least temporarily—to get what you think you want:  a binge.

In this post, I’m going to explain why you sometimes feel like you want to binge (even though you know you want to recover) in a way that I hope will provide a fresh perspective. Then, I’ll explain how to get through those times without letting it derail your recovery efforts.

To understand your inner conflict, it’s important to understand that there is a big difference between feeling like you want something in the moment, and truly wanting that thing.

On a simple, basic level, we all have two different types of wanting:

1.)    “Primal wanting.”  Primal wanting comes from the more primitive part of our brains—from a region that’s often called the “reward system.”  The reward system drives us to perform pleasurable activities, survival-based behavior, and encourages us to avoid pain—whether that’s emotional or physical pain. The reward system makes us “want” to perform our conditioned habits and makes us “not want” to do things that aren’t pleasurable or that we perceive might be painful in some way.

When the reward system is working properly, “primal wanting” isn’t usually a problem. It drives us toward natural and necessary behaviors, and stops us from getting hurt. However, this same reward system can be activated by destructive behaviors and habits that have been reinforced over time, especially habits that involve pleasurable substances like drugs and large amounts of binge food. In destructive habits and behaviors, primal wanting could also be called “false wanting,” because it tricks you into believing you want something that you really don’t want.

When it comes to bulimia, the reward system becomes conditioned to react as if binge eating is vital to your survival.  When it is triggered, it gives you that strong feeling of wanting to binge.  It’s only doing its job because it senses that you actually need to binge, but you know that you don’t. (*Note: If you are still dieting restrictively, you might need more food, but you don’t need to binge).

2.)     “Cognitive/Rational Wanting”  The second type of wanting is a less immediate “want.”  Cognitive wanting arises from the more rational, uniquely human elements of your brain.  Cognitive wanting often involves working toward a goal, or at least involves some waiting to get what you want.  It’s not driven by the thought of immediate pleasure without regard for long term consequences.  This type of wanting describes your desire for recovery.  Even though you may not feel and see it all of the time, you—your true self—wants to life free of your eating disorder.

Knowing that there are two different types of wanting, driven by two different pathways in the brain, helps you make sense of your inner conflict.  To sum it up:  The primitive part of your brain is automatically, and often persuasively making you feel you want to binge—while your higher, rational brain truly wants recovery.
This explains why your urges to binge feel like such an intrusion—those urges get in the way of your goals, your real desires, and the person you know you can be. Knowing that the binge urges are just an expression of irrational, false wanting gives you a clearer picture of why you have this inner discord.

How to Disregard Primal/False Wanting
To start overcoming this inner conflict, it’s important to look at when you feel that you want to binge.  Is it in the moments leading up to a binge?  Or is it afterward and between binges when you are feeling connected to your true self and your desire to recover? In the vast majority of cases, you only temporarily want to binge prior to a binge; and afterward, you’ll realize that you, in fact, didn’t truly want to binge at all.
It’s easy to recognize that it was false wanting after a binge when you are experiencing the consequences—and it’s then that the desire to recover resurfaces. The good news is that you don’t need to binge to make your true desire to recover resurface.  Your desire will resurface even if you don’t binge—once the urge passes.

The key is to be able to recognize false wanting prior to a binge, not just afterward.  To do this, it can help to write down the thoughts and feelings make you feel you want to binge. Then, every time you start to hear all of those thoughts and feel all of that desire, you’ll recognize it for what it is:  just the brain’s reward system doing it’s appointed task, and you’ll know it’s just a temporary state you can pass through.

You can learn to experience the false, primal wanting in a different way—with detachment. Detachment means that you aren’t actively bringing attention to what you are experiencing. Without the fuel of your attention, those feelings of desire will fade way, the urge will pass, and you’ll reconnect with your cognitive/rational desire for recovery. You’ll also be so happy that you didn’t let the primitive/false wanting derail you from what you truly want—a life free of an eating disorder.
The best news is that if you can pass through those feelings of false wanting over and over, the primitive brain learns—it is reconditioned, and it gradually stops producing the desire to binge.

*I focused on binge eating here, but know this same concept can apply to other eating disorder behaviors you sometimes feel like you “want” to do—like dieting and/or purging—which become conditioned habits as well and are often driven by false wanting.

If you want extra guidance as you learn to develop a healthy relationship with exercise, food, and weight, here are some resources for additional support:

Group Coaching – Get help from coach Julie and support from others who are overcoming this habit. Includes a forum that is open 24/7, weekly group coaching calls, mindfulness resources, plus course access.