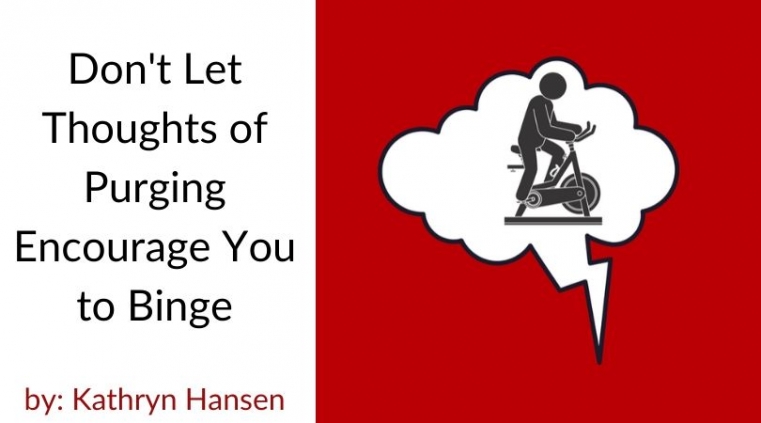 It is my belief that the urges to binge are the only direct cause of binge eating.  An urge to binge is: any thought, feeling, or physical sensation that encourages a binge.

For those with bulimia, the thought of, “I can just purge afterward” often strongly encourages binge eating.  To avoid a binge, it is necessary to avoid giving thoughts like this value.  In this post, I’m going to help you stop letting thoughts of purging encourage you to binge.

The thoughts of purging may have started off as conscious thoughts, likely at a time when the urges to binge were first appearing in your life.  When you began feeling such a strong compulsion to binge (typically following a period of dieting), it was likely so uncomfortable that it made sense for you to try to come up with reasons to give in to the urges.  You may have rationalized by saying, “okay, I’ll give in now, and then I’ll do something to compensate for it later.”  You may have compensated by exercising excessively, taking laxatives, restricting food intake, or inducing vomiting.

As your binge/purge cycle repeated, thoughts about purging, which started out as conscious thoughts, likely became habitual and began automatically appearing each time you had a binge urge.  I remember when I was bulimic, the thought of “I can just do a bunch of exercise tomorrow to make up for it” was often a tipping point where I’d decide to act on the urge and begin a binge.  I’d sometimes even go so far as to mentally plan the next day’s exercise before I followed the urge. Promising myself that I’d purge often seemed to give me the green light to binge. But, afterward, I’d always, always regret it.  I hated exercising excessively, I always wished I hadn’t binged in the first place, the purge did not erase the pain or shame.  The illusion that purging would erase the pain was just that – an illusion.

Even if you know your purging behaviors are unhealthy and want to stop them, during a binge urge, the purge thoughts will still automatically come up. The key is being able to recognize them and dismiss them in the moment of an urge. Thoughts encouraging purging will often tell you that a purge will “undo the damage” of a binge. When you are not feeling tempted to binge, you can see how false this thoughts is; because of course a purge does not “undo” any damage, it does the opposite – it’s causes severe damage to your health and your life.  A purge does not rectify a wrong.  It is an additional wrong, an additional (and often worse) source of suffering.

During binge urges, thoughts about purging can make it seem like repeating the binge/purge cycle one more time will be harmless, but you know it’s not harmless.  You know it’s causing damage in your life, you know it’s dangerous, you know it’s not what you truly want to be doing.  Like any thought that makes binge eating seem appealing, thoughts encouraging a post-binge purge need to be dismissed.