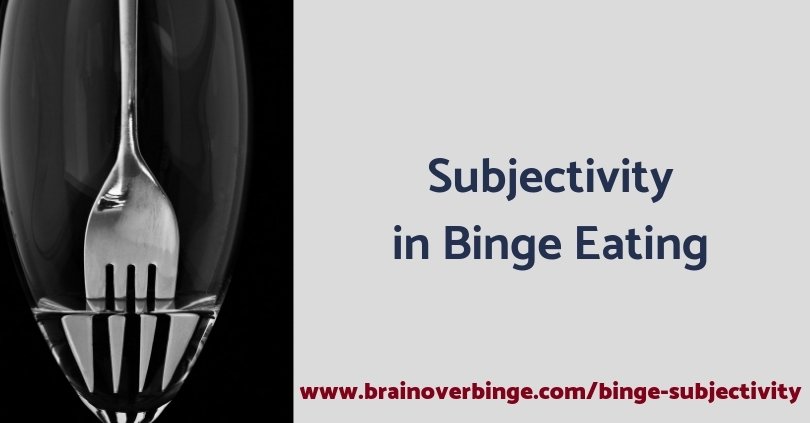 If you never binged again, what would that mean to you? I’m not talking about all the ways in which your life would be better or the relief you would feel to put your eating disorder behind you; I’m talking about something much more simple. I’m talking about defining the behavior you want to get rid of.  If you commit to never binge, you may need to give some thought to what you won’t be doing, because binge eating can be a subjective experience.

There is not a calorie cutoff where any more is a binge and any less is not, and the clinical definition of binge eating leaves room for interpretation. According to the DSM (Diagnostic and Statistical Manual of Mental Disorders), a binge eating episode is characterized by:

The DSM also says that binge eating episodes are associated with three or more of the following:

All of my binges had the characteristics above; but I think more importantly, I could define my binges by what they felt like. There was an unmistakable mindset and way of eating; I just knew on an intuitive level what I considered a binge, and what I did not consider a binge. It seems to me that the majority of people who binge also have the same intuitive clarity about defining their binges, or they develop that intuitive clarity by observing their behavior and increasing their awareness surrounding their eating. However, some people do get stuck trying to figure out what is a binge for them and what is not, and if that’s the case for you, it is even more important for you to give some thought to what quitting binge eating will mean.

I believe it’s important not to overthink what is a binge and what is not. A lot of people with eating disorders have perfectionistic personalities and might get caught up in trying to have an ideal diet. If you are aiming to eat perfectly, you may find yourself wondering if all non-hungry eating should be considered binge eating, or if overeating should be in the same category as bingeing, or if you should include eating any amount of junk food in your definition of a binge. It’s important for you to know that these behaviors should not be automatically classified as binge eating.

You never want to have a definition of a binge that requires your eating to be overly restrictive or requires you to eat perfectly.  There is certainly a point when overeating or eating junk food can become problematic and can cross the line into binge eating, but there is subjectivity in where that line is, and only you can truly decide.

I think I would have driven myself crazy if I would have treated every craving for junk food or every desire to eat when I wasn’t hungry as an urge to binge. I think it was important that I defined my binges by what I knew them to be, and not by over-analyzing or creating rigid food rules for myself. I do value health and eating well, but eating in a way that is less than perfect is perfectly normal.

Be curious about defining your binges. Try to see when you personally, subjectively feel like you are going from normal (imperfect) eating to what you would consider binge eating. Heighten your awareness to notice what is happening, how it feels, what you think, and what behaviors are present that are typical of your binges.

When you are first learning to recognize your binges and separate them from your more normal eating habits, you may only have insight into what happened after the binge. But, if you remain aware, you will start to see clearly what’s happening during a binge, and then before you start a binge, so that you can choose not to act on the urges and not engage the habit.

If you need more help with this, the Brain over Binge Course guides you through defining your binges and recognizing your urges.