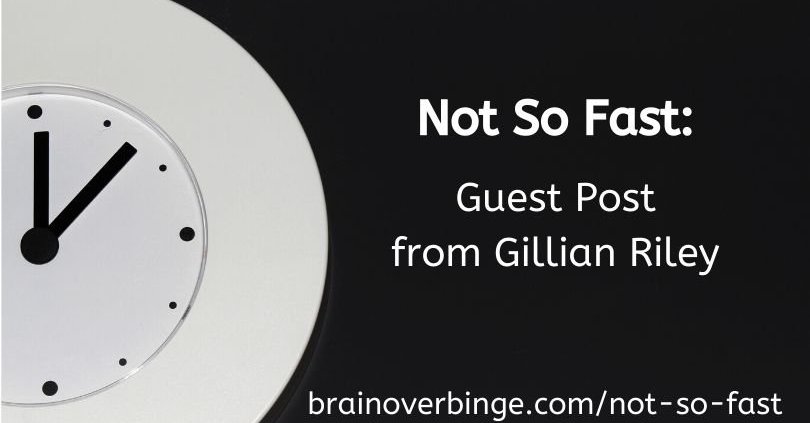 It seems that fasting has become the new standard of dieting, and also a central focus of the health community as well. Like most diets, it’s presented as the answer (or at least a partial solution) to many health and weight issues, and even as a potential solution for binge eating. I’m sure you know more than one person in your life who is on a fasting-type diet. I also know that fasting can be portrayed as “not a diet at all,” but as a lifestyle and way of eating that’s “more in line with how our bodies are designed.” These are complex issues, and although I would not make an overarching statement that binge eaters or recovered binge eaters can never fast under any circumstances, I think there are many compelling reasons not to.

I get a lot of questions about fasting and binge eating recovery, so I want to share a guest post from Gillian Riley, who has great advice on this topic. Gillian is the author of Ditching Diets, which I recommend on the FAQ page of this website, and I also cited Gillian’s work in my second book, the Brain over Binge Recovery Guide. You can read more about Gillian Riley in her bio at the end of this post. As you read, know that Gillian doesn’t write specifically for binge eaters, but for anyone who struggles with poor eating habits, yo-yo dieting, and overeating. However, what she says is also applicable to those of you who binge, and I hope you find her well-informed guest post helpful.

NOT SO FAST (by Gillian Riley)

When it was published in 2013, I bought a copy of the bestseller The Fast Diet to see what it was all about. In case you don’t know, it was published as a result of the interest in the BBC Horizon documentary about Intermittent Fasting (IF), written by the program presenter Dr Michael Mosley and journalist Mimi Spencer.

I believe that fasting is beneficial, but not necessarily advisable for everyone, so I wanted to read the book to discover new information and research, but also, I was curious to see if it contained any words of caution. There are words of caution about fasting; a paragraph on page 124 warns those with Type 1 diabetes not too fast, those with an eating disorder, children, and those who are already very slim. And anyone with any medical condition should consult a doctor first.

If you bought a copy of my book, Eating Less, between 1998 and the first half of 2005, you’ve got an edition that contains a chapter on fasting once a week. As well as instructions on how to fast in a non-addictive way, I describe some good reasons not too fast. In later editions, I took out all mention of fasting, partly because people weren’t paying any attention to those reasons. Perhaps it’s time now to put them back in (if I could) but here’s how they appeared in those first editions of Eating Less:

This has some similarity with Mosley and Spencer’s cautions, but also some differences. In particular, my caution not to fast if you don’t normally eat high-quality food would seem to contradict their advice to “eat what you like most of the time”. However, Mosley and Spencer say,

“You could pig out on your non-fast days…but you won’t do that. In all likelihood, you’ll remain gently, intuitively attentive to your calorie intake, almost without noticing. Similarly, you may find yourself naturally favouring healthier foods once your palate is modified by your occasional fasts. So yes, eat freely, forbid nothing, but trust your body to say ‘when’.”

So they seem to be saying that it’s fine to eat anything at all on non-fast days, but once you’ve started fasting you’ll end up eating healthy food anyway.

Now, I’m a great advocate of an if-it-ain’t-broke-don’t-fix-it approach to everything, so if IF works for you, that’s wonderful. But all too often people struggle with such advice – and they blame themselves. They conclude, “for everybody else, fasting two days a week is not only fairly straightforward, but also sorts out all the rest of their crazy eating on the other five days. What’s wrong with me that I can’t even begin to do this?”

Maybe it’s not that fasting isn’t a good idea, but that there are other important steps for you to take first. To return to my cautions:

I’ll add that if you exercise a great deal, if you regularly sleep badly, and/or if you are under quite a bit of stress, these also mean that fasting may not be right for you at the present time.

I suspect all this is sounding a bit negative, and the last thing I want to do is to dissuade you from fasting if it’s going to work for you. By all means give it a try. Notice and manage your addictive desire to eat and you can certainly find that it fits in very well with everything you’ve learned in my books and webinars.

The Fast Diet does advise against fasting for those with an eating disorder, and I agree with this. I’d take it further, though, because there are a great many people who have a tendency towards disordered eating who would do well to sort that out first, before considering a fast of any kind.

Gillian Riley is an author and webinar host who has been teaching her course on “Taking Control of Overeating” since 1997, at first in groups in London, England, and for the past three years online.
Her clients describe themselves as yo-yo dieters or ex-dieters. Instead of recommending what, how much and when to eat, Gillian teaches how to develop an entirely new attitude towards food, eating and weight loss. This way of thinking turns the diet mentality on its head, leading to a sustainable control of overeating.
Details on her free introductory webinars and one-week free trial of the membership site – starting January 26, 2020 – can be found at: https://eatinglessonline.com
NOTES

I also did a video podcast episode with Gillian Riley (Episode 64: Stop Yo-Yo Dieting and Take Control of Overeating) where we discussed many topics related to developing a healthy relationship with food:
Watch the video interview with Gillian Riley on Youtube
Listen to the audio-only version on the Brain over Binge Podcast